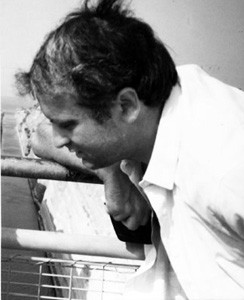 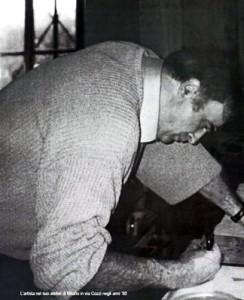 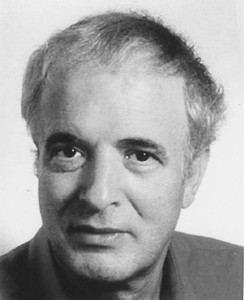 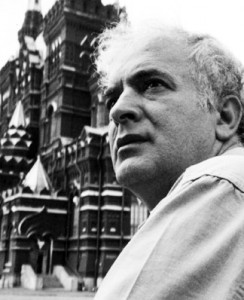 Carmine Jandoli was born in 1948 near Avellino (Atripalda) and when he was 20 he moved to Milan, where he still lives and works. Pupil of Veronesi and Alik Cavaliere, he studied at the Brera Academy, graduating with a thesis on the Andean culture. There, in the second half of the Seventies, he joined the Nuova Figurazione group, interested in the political and ideological discussions of the Realism. In the same period he became full professor of drawing and art history at high school and, with his friends of the Brera Academy, he exhibited for the first time (1972) at the third S. Fedele show. Considering these premises, is easily understandable his great interest for contemporary art – as a critic and art historian.
On the other side – the artistic practice – his early career was based on sculpture and ceramic, while the following path passed through three different stages. Interested, at first, in narrative topics (landscapes, spiritual topics, portraits, mythological themes), then he adopted a more stylised manner, finally taken it to the extreme during the final phase, where the colours acquired more and more importance.
He was awarded numerous prizes: in 1972 he won the National Prize Ambrogino d’argento, in 1973 the First Painting Exhibition in Massa and took part to the Third National Exhibition in Viareggio. Then, in 1974, he was awarded at the exhibition “Ora e sempre Resistenza” (“Resistance. Now and Forever”) in Milan. In the same year he was invited to the “award G.B. Salvi” in Sassoferrato and, in 1975, to the contemporary art exhibition in Torre Pellice. In 1976 he took part to the Graphic Biennial in Cannes and the following year to the Second Exhibition of Civil and Political Graphic in Milan.
Again, in 1978 he was invited to the itinerant exhibit “Pro-Sante-Chili” (France, Belgium, Italy and Germany) and he also collaborated with the CIASPO association (research centre for the Popular Health in Santiago). He has always been concerned with the contradictions of our society and has suggested different uses of media and visual communications.
He also collaborated in the arrangement of several educational exhibitions and, during the last seven years, he has been one of the promoters of the shows at the Priamar Castle in Savona: “Omaggio a Charlot” (“Homage to Charlot”, 1987), “Le Maschere nella commedia dell’arte” (“The masks in the Comedy of Art”, 1988), “U me murtà”, 1989, “Onda su onda…” (“Wave after wave…”, 1990), “Romanzo” (“Novel”, 1991), “Colombiane. Vele iconiche al Priamar” (“Colombiane. Iconic sails at Priamar”, 1992), “Cinema è…” (“Cinema is…”, 1993). Among the most recent exhibitions there are “Artisti per la Politica pulita” (“Artist for honest politics”) in Turin, “Starimost” – an aid for Bosnia – in Verbania (1993), “A tutto tondo” (Milan, Permanente, 2002) and, in 2003, “Tucuman” – an artistic project in Argentina.

“The relationship Jandoli has with the artists and artworks of the past is not simply oriented towards a research of topics, mechanically transformed in contemporary images; on the contrary it is a sort of mental reflection (contemporary, this time) that nullifies the historical distance between the two eras and consciously recognizes the use of the same expressive instruments, retracing the same contemplative and ideal paths.
Walking through this itinerary, the artist is finally able to reach a particular, specific style, absolutely personal and recognizable”.

“Inside the creative production of Jandoli one can perceive an impression of mistery, different from the modern, magnificent, astonishing and unknown sensation originated by his use of the metaphor. The impression of being at the edge of something unknown – a suspension comparable to the one found in some Henry James’ tales – and the wait for an imminent and obscure event are part of a figurative research linked to the metamorphic sense of the Earth space.
Beyond his unique poetics, the linguistic structure focused by Jandoli is very interesting: one has to take in mind the affinity between the susbstance-colour and the primigenial-sediment sign – «mnemonic or engram», quoting Jung –, however, doesn’t have a simply symptomatic nature; on the contrary, it flies in a superior sphere, linked to the symbolic and psychic world…”.

…
Before any represented shape, colour is the subject of the paintings: intersections, tangencies, coatings, fusions which originate the pure pleasure of the sign. Colour as motion, not a concluded colour-field but always a possession of the space, construction or collision or mysterious presence, event of complex relations into the painting boundaries. Sometimes the shapes condense in a specific point of the canvas and stand out against the immense sky, sometimes they cannot rest and fluctuate, transmigrate and run through the space, they clot it in transfers of sense, memories indeed: after fifty years, the thousands of artworks observed, metabolised and memorised establish a wide-open vista, where your own style and poetics can find their place. Among several encounters and confrontations with other artists, Jandoli loves quoting, in relation to his own artistic path, only the recognised masters of his academic education, Veronesi and Cavaliere. His artworks are solos beyond the trends and far from the schools, they leave aside the intention of conforming to existing poetics, even though in his paintings you can sense the taste for the “modern style”: between Futurism, Orphism and Surrealism, the tendencies characterising 20th-century Italian art. What you can sense as formal vocabulary is merged in an unique style, declined in various solutions, with abstract colours and compositions prevailing over the literary or figurative subject.
…

From “Contaminations” – by Maria Fratelli

…
The use of oil painting, acrylic or ink has this effect in Jandoli’s art: to create moments of pure visual magic.
The richness of small details captures the human eye while trying to find and solve the mystery behind the creation of color juxtaposition and overlapping.
Once reached the awareness, it is possible to find a common feature in every painting, linking the spiral of the artist’s different ways of expressing himself.
This feature is the painted background, whose colour campiture build up a peculiar light. The light will be able to embrace and support the pictorial adventures, and the unlimited disorder that goes on even beyond the canvas bounds.
Within these emissions of coloured light the painter is building up a world of his own visions, both the visible and the invisible ones. This is the flow of the space of memory, fluctuating and collapsing, sometimes penetrated by the dim light of tranquility and pleasure, some other by delight or the darkest anguish.
…

From “The strength of line, the emotion ot the colour” – by Silvia De Vecchi

“Already in Il Giudice (The Judge) Jandoli referred to a mysterious ‘somewhere else’, suggesting that we weren’t able to see the actual reality but just a copy of it, a mask that separates us from the truth. Today he paints with more and more free spirit. He creates objects that were previously nonexistent. He creates them with a specific gesture and is this technique that is personal and unique and impressively live on canvas. He doesn’t see – not anymore – the world separated between black and white, he abandoned this atavistic dichotomy, focusing on the colour for its internal, multiple meanings. A variety of colours mutually meet creating spiraly design, which becomes a unique chorus composed by different sounds…”.

“The world created by Jandoli is based on a tension between counteractive forces he hurls on his artworks where black and white have to complement each other, staying separated. They are put together in fields where there are no precise borders so they can dialectically meet, collide, separate, invading the whole surface of the canvas – actually it is better than a piece of paper, because in this way the artist can engrave on a plate his disapproval of the present society.
He is an expert of graphic art and, considering that, the etching is the best technique allowing him to express the violent tension of the present time. One can see the precise and circumstantial analysis of the reality conceived by Jandoli in an artwork like “Il Giudice” (“The Judge”): a drypoint where an arrogant, faceless figure has a recognizable symbol of power on his hairy head. Representing the superior unappealable truth, typical of an unalterable justice: an ideal concept eradicated from the real life. “Justice be done and let the world fall apart” silently grumbles the magistrate in a hall where there is a gloomy atmosphere on evanescent figures. A justice – the one described by Jandoli – that persuades us to agree with Henry Mencken and to consider that, maybe, the injustice would be more acceptable”.

“Jandoli pays attention to phenomenal and natural events that he observes and transfigures, focusing on details rich of substance: in this way he overturns the archaeological process, where some fragments are then reintegrated as a whole that matches with the perfect combination.
The main topics of Jandoli’s artworks confirm his philosophy: dynamic, energetic, explosive events capable of actualizing the ambiguous oscillation between iconism and aniconism, characterizing the themes privileged by the artist. The titles of his works are mainly due to the analogy than to a real reference, they are an amount of invented forms, full of symbolic possibilities.”

…
An artistic career stated at the end of the 60s and focused on the ceramic manufactury, with alt its transparencies and its strong dephts, then addressed to a pictorial sensitivity, more immaterial and spiritual, stili marked by figurative elements, as we can see in some portraits and in some thematic choises related to the myth. Finally, in the most recent times, the artist arrived at a significant and recognizable composition, created by his persona[ experience and his expert hand , able to freely treat a pictorial surface.
In other words, this is the result of the work of Carmine Jandoli: a set of artworks where you can see the training he learntfrom his masters – the colours of Luigi Veronesi on one side and the magmatic power of Alik Cavaliere on the other -, then modified and re-lived thanks to a decennial experience.
…

You can find out more about which cookies we are using or switch them off in settings.

This website uses cookies so that we can provide you with the best user experience possible. Cookie information is stored in your browser and performs functions such as recognising you when you return to our website and helping our team to understand which sections of the website you find most interesting and useful.

Strictly Necessary Cookie should be enabled at all times so that we can save your preferences for cookie settings.

If you disable this cookie, we will not be able to save your preferences. This means that every time you visit this website you will need to enable or disable cookies again.